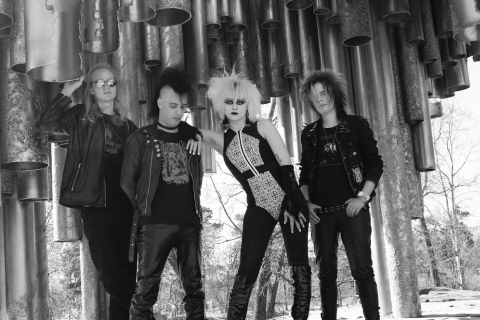 Masquerade began in late 2012, founded by vocalist Suzi Sabotage and then-bassist Sebastian Holm. Before the end of 2012, Masquerade was quite a long time a vaguer post-punk project with no specific name, riddled with temporary musicians who changed frequently. The first shows were set up under these circumstances, which included playing at Finland's most famous goth festival, Lumous, the next summer which the band was accepted in already on the basis of a rehearsal room recording of Play Dead (first song Masquerade ever wrote), featuring a drum machine.

The first solid line-up consisted of Markus on drums and Joel on guitar in the beginning of 2013, which both were part of creating Masquerade's distinct sound. The band started to evolve as a whole followed by such early songs as Needle Through a Bug, Cuts and All Things Hurt. Group soon gathered interest in Finland and even abroad despite having no recorded music or video, ending up on national television in August, new shows conjuring up. Helsinki's most significant punk venue Lepakkomies held their first official gig, and the event was sold out.

Their first release was a promotional demo on internet consisting of three songs. They were praised and widespread over all expectations and brought Masquerade a lot of additional attention, i.e. being listed in Cvlt Nation's six best releases of 2013. The first music video was one hundred percent self-made clip for Needle Through a Bug, in which they already had a new bassist. Early in 2014, they got a proposal from Fight Records for a maxi-EP, which they went to record to a studio in Kouvola, Finland for three days in February. After that Masquerade was set for March tour in their Finland, England and Sweden.

A music video for All Things Hurt, the second song on the upcoming record, was released in spring, following the departure of Joel and Markus. In July song Cry Like Birds was published to promote the record. October 2014 held finally the day when the maxi-EP Blood is the New Black was released, and also got a distributor in the USA, Mass Media Records. In January 2015 our current bassist Jacques Saph joined in. On March 8th the band was seen on MTV3 channel as guests in a programme called Tähdet, tähdet. In April the band took William Freyermuth in drums and Anton Välimaa in guitar.

June 2015 saw the band's first Russian gigs and in August they embarked upon their first journey outside of Europe: U.S.A. and Mexico. Shortly after that, they started to record and mix the upcoming album, releasing a new digi-single Panic Paranoia. In June 2016, the guitar was taken over by Rudy Soininen. Their latest album, Ritual, saw daylight on 15th July 2016, including ten tracks. Aside of songwriting, the band produced the mixing, mastering and artwork of this record.

In August 2016 the band signed a contract with Danse Macabre Records, who later released Ritual in CD format. In September 2016 Masquerade set upon a Europe tour which conquered two new countries, Italy and Austria.

The band played at the legendary Wave Gotik Treffen in June 2017, followed by release of their fifth music video (a song off the forthcoming second album) "Too Depressed to Dance".